Follow the higway or the nationl road toward Bardonecchia, drive through the town and follow for Melezet. Follow the route next to the ski slopes and toward Grange di Valle Stretta. Leave your car before 3°Alpini and I Re Magi huts.

Finally we come again in our beloved Stretta Valley, maybe one of the most charming places just one hour and a half from Turin.

As usual, we leave from I Re Magi hut, leaving the malga -the place where the local farmers sell their products- as our prize at the arrival.

A little curiosity: this hut, I Re Magi, takes its name from the three high peaks on the right of the valley, Melchiorre, Baldassarre and Gasparre peak, the three Magis.

Entering in the valley, is impossible not to notice the huge bulky rock just in the middle of the landscape: 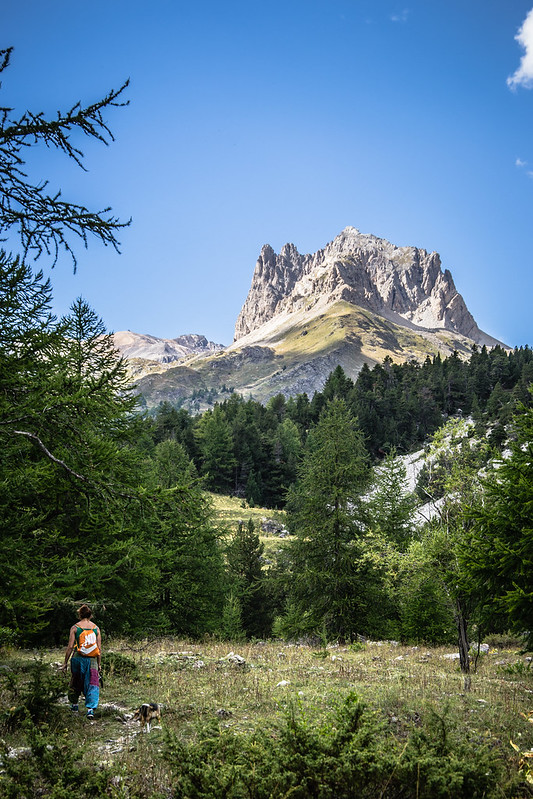 Its awfulness and cetrality have always make us think it was the Thabor. Lately, it has been some kind of challenge among our group, on who will be the one to conquer it first. However, not sure about our guess, watching carefully the map -we should have done it long before- we understand that something is wrong: the path toward Mount Thabor continue long after the valley and it doesn’t even pass in the middle of the valley.

So we ask for more informations at the local guides and finally we discover the truth: the bulky rock are actually two peaks, Big Seru and Little Seru. It has taken one year, but we finally have solved the mistery, Mount Thabor is not that central one and, above all, it isn’t that close

Today has started with the aim to completely relax, a little hike to the Green Lake -an easy 45 minutes walk- and then a relaxing pic-nic and the rest of the afternoon spent chilling out in the grass, with the flush of the little river as the only sound heard.

Arrived to the lake, we discover a little hidden jewel, made of all the shades of emerald and blue, it does seem a corner of Paradise fallen down to Earth and even who has already been there is totally stunned by the view. 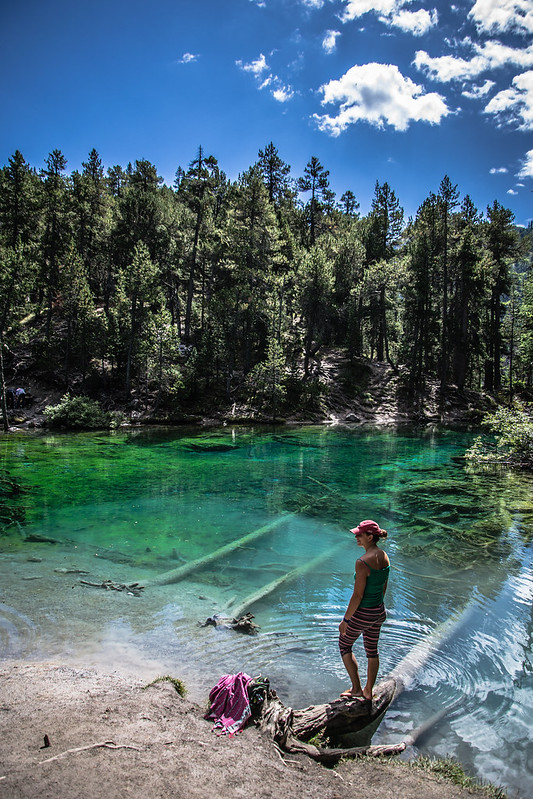 In spite of the freezing water, the lake is so appealing for our “little” dog to spash and swim around, for the happiness of all the kids around the lake.

But there are no grassy banks to lay on, just a muddy shore, so we left, searching for the little wooden bridge in the Foundry Plain, just near the hill that hide the lake, where we are supposed to have lunch, or we still think so.

We aren’t so hungry yet, so we decide to go on to the next valley. It takes us to overcome a little muddy hill and the greenish woodland just after, another rocky hillside -we weren’t supposed to have a relaxing afternoon, don’t we?- and we arrive to the the upper plain.

Our realxing hike, at this point, has already been quite longer than planned, but the view that suddenly appears just in front of us is rare, and we still are not able to stop. In fact, the path goes ahead, through a pasture and then a green grassy plain, always having the little river flowing near us, fueled by the melting snowy patches everywhere just a little higher.
It is like being throw in the Lord of the Ring movie, an amazing show the leave us speachless, and make us going on and on, our pic-nic already forgotten and our relaxing walk lost miles down the valley. 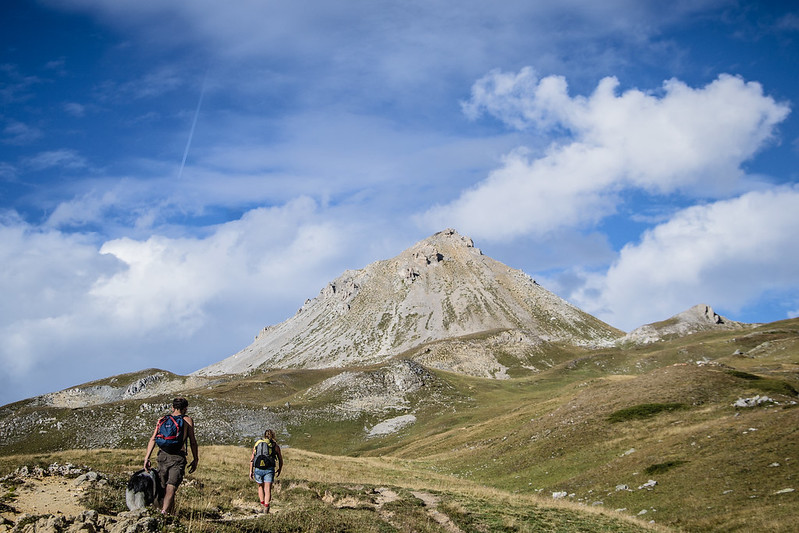 We continue on the steep trail that becomes steeper and steeper, climbing up the left of the ridge, and after bumps and dips -believe me if I say that the pictures can’t even give an idea of how amazing this place really is!- and we finally reach the top at the Col de la Vallèe Etroite. We are now totally in the French land. 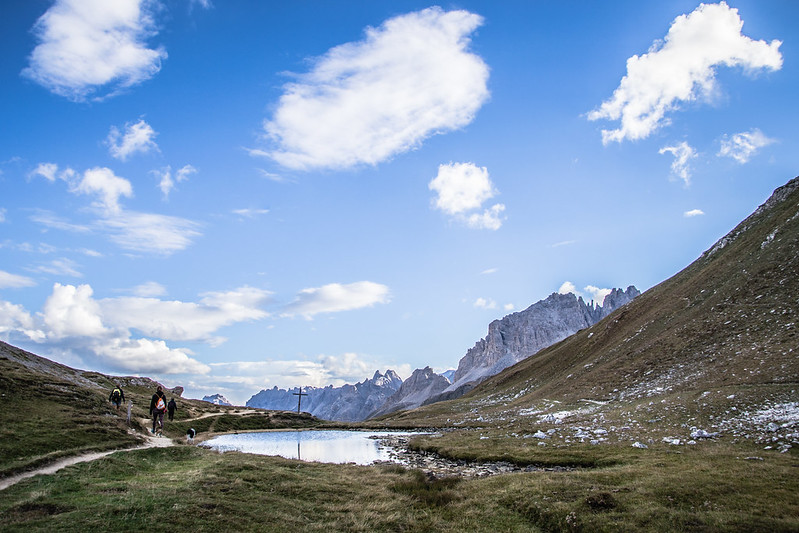 We pass by the cross, signaling the 2.434 mt. height, and getting around the little hill, finally, we begin to glimpse what has slowly became our goal: le Refuge du Thabor, the hut that takes its name from the Mount.
The name is totally misleading, since Mount Thabor can’t even be seen from here, and the signal says that it takes about 3 haours and a half to arrive there, passing by Peyron lake and then climbing the valley that we left on our leftside this morning, just after Grange.

But don’t misjudgje me, it is totally worth coming up here! Arrived to the last sinking, just a little climb still wait for us, but we finally can see our prize, up there, on the plain, lighted by the sun that is beginning to set -yes, it’s six o’clock and we are still going up! 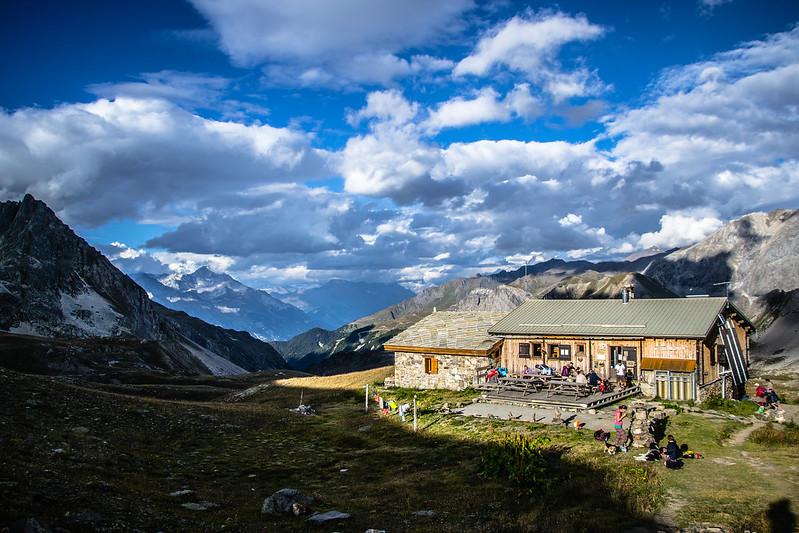 In the end, we arrive at out latest destination, but still not totally satisfied. It takes us some more steps -just a few ones- only meters to come and admire the first one of the Santa Margherita lakes, Round Lake (the next one, Long Lake, can be found in the next dip, but is too far now, we leave it for the next trip).

Once again, we found ourselves admiring the Mount Thabor, or at least we think so, until discovering that is it the less famous -but not less majestic at all- Cheval Blanc (White Horse), massively towering above the lake, which take its name from its pale rock colour, almost white. 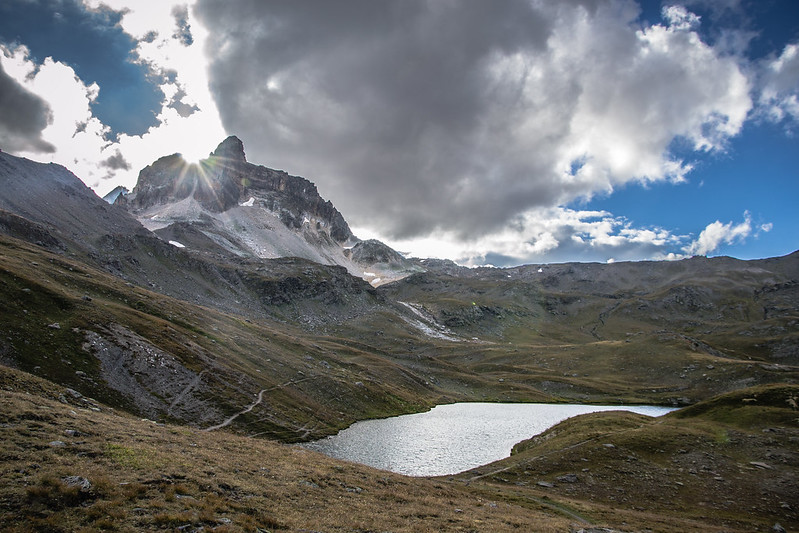 And is time to eat something, some french sweet specialties, typical of high mountain. Even if by now it is quite late, we still lay here admiring the landscape, the Frejus valley, our loyal dog always with us, even him enjoying the view.

“The intoxication of the hour spent up there, isolated from the world, diving in the glory of the heights, can satisfyingly justify whatever foolery.”

A too quick stop, but the evening is coming fast, and we too have to fastrly going down back home, since the sun is already setting behind us, escorting us all the way down and painting the clouds and the sky above us with all the shades of orange and then red, darker and darker, util it becomes dark.

We never get bored of the mountains, they are always different, changing depending on the time of the day and showing us an evertime different scenary. It seems we are sourrounded by artists that paint so many different pictures, as being part of a movie in which we our the main charachter, both us and the nature we are surrounded by. 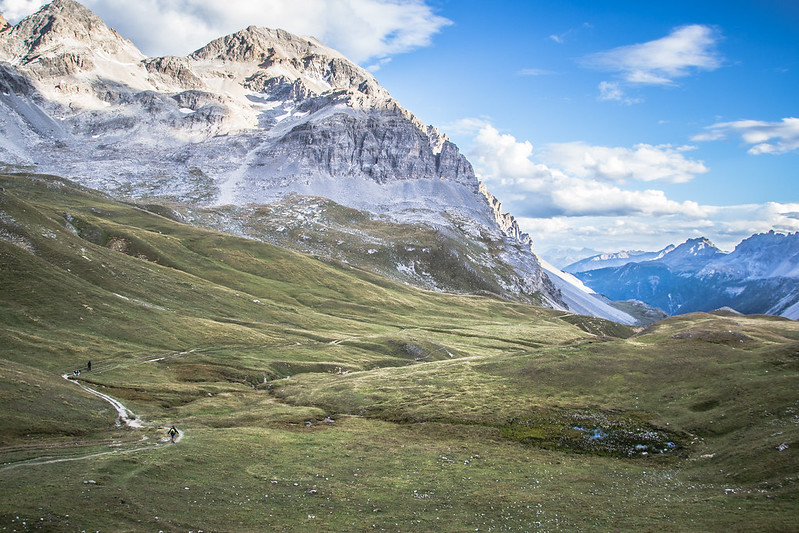 Just before reaching Foundry Plain, we need to come closer to the tadpoles pond, attracted from the lights and the shadowed mountains that are creating the perfect ambience for the picture that will make us remind this beautiful day.

So now it is a challenge between the Thabor and us, we have to climb there the next time!