Wild women: it can seem strange, but it isn’t

Just one premise: watch movies in its original language, if possible. Maybe add subtitles, but it really is different. Original text are better than the translation, adapted to the labial spelling and often so different from the original, voices are different too and it does the difference. Even more, is a good practice to learn a new language without studying on the books. 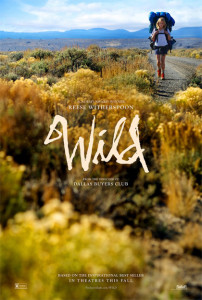 Today I’ve watched Wild, the last movie in this serie of wild adventurer women movies I’m watching lately. After the now notorious Into the Wild, the sadly famous story about the life of Christopher McCandless, aka Supertramp, who leave his previous life and head to the marvellous Alaska, without specific competences of surviving – and he does die for a preventable mistake, indeed – there are now too many movies based on adventurer stories, who leave their boring city-lives to experience the wild and undiscovered. What does actually surprise me, is that a big part of this adventurers are women.

Don’t get me wrong, I’m not surprise of the fact they are woman, but of how this is cause of amazement of the critics and the whole world. As if a woman should be confined at home, knitting and cleaning, and cannot be capable of leaving alone for great adventures and survive in the wild. Hence Wild Woman are still a taboo.

“You were wild once, don’t let them tame you.”

I wonder how it can be possible, in 2015, that people have still not understand that yes, a woman can be physically less stronger than a man, but that she can be a lot stronger on the emotional and psychological level.

Anyway, lately I’ve seen these two movies – and I will soon read the book – Wild and Tracks – here you find the trailers, Wild and

Tracks – the stories of these two women who, for extremely different reasons, leave their lives to search for their inner selves and measure themeselves with the world which sourround them. heading on a long and hard path.

In the movie Wild – watch out, spoiler alert! –  Cheryl, to redeem herserlf from a devastating time of no-limits sex and drugs, leave for the Pacific Crest Trail, a long hiking path which starts un the US West Coast, almost at the boundary with Mexico and finish up in Canada. It is a long, introspective travel for her, maybe too much: in fact, the priority is given to the story, and the ones who expect breathtaking views and super panoramic scenes, will be disappointed. There are some landscapes scenes, but they are way too far from the majesty of the ones in Into the Wild. What a shame, but it is anyway a great movie with a wonderful actress.

After this movie, and I can bet even more after reading the book, I’ve already begin to plan my personal Pacific Crest Trail project, maybe only for the last half, the 2.000 and more kilometers in the north, among green and picks.

Tracks – watch out, spoiler alert! – on the other hand, is amazing under the visual point of view: the deserted australian lands are often filmed in their full majesty and the landscapes are breathtaking, not so green and luxuriant as I like, but it doesn’t matter. Definetly, being a real story originally followed and documentated by the National Geographic, has highlited the visual aspect, even if it remains a great plot really well told. It has to be seen, a great woman and a wonderful tale.

Both of the book are on my to-read list and even if I’m in the middle of a quite long read – that really is worth the time spent – as soon as I will finish it, these two amazing women will be the object of my interest.

Summer 2014, a piece of the Rota Vicentina, Sagres, Portugal